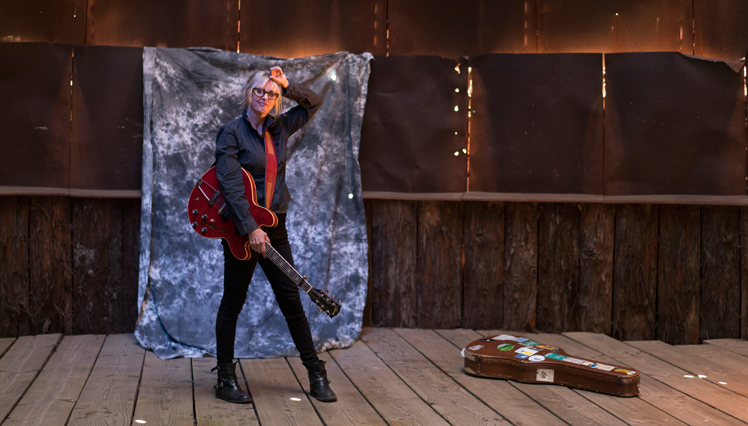 **** (4 stars) “Cindy Lee Berryhill has been releasing records since the ’80s and “The Adventurist,” her first album in a decade, is a solid offering that shows why she was one of the original and defining forces of the “anti-folk” movement. Her songs here are entrancing and compelling, while maintaining a winking sense of humor and a bit of casual quirkiness. “Contemplating the Infinite in a Kiss,” for instance, is packed with appealing nuance. Of course, there’s also a whimsical, nostalgic quality at work here. Part of the reason for the 10-year break between Berryhill’s records was the illness of her husband, music journalist Paul S. Williams, who suffered a brain injury in the mid-’90s that eventually led to early-onset dementia. This is her first record since Williams’ 2013 death.
There’s a sense of worldliness in Berryhill’s delivery. The title track alone fits its encompassing title. There’s a freeing sense throughout this album that new terrain is meant to be conquered while Berryhill maintains an attitude that is all her own.
The opening, spoken-word intro on “Thanks Again” is mighty and commanding, while “Horsepower” has a strikingly unique sense. This record, throughout its 14 tracks maintains a strong quality. Berryhill sounds hungry. This record sounds like something she’s been quietly constructing over the last decade. It is the work of an artist who still feels like she has something to prove and not that of a coasting veteran. Of course, in the span of 30 years, she has only released seven records and she’s still a cult hero and not a big name. That should change.
“The Adventurist” is a fascinating record, packed with personality. The disc gives Berryhill’s career an effective and strong restart after a considerable break. It’s greatly evident even after a just an initial listen that this album deserves a much wider audience.” — Allan Raible, ABC NEWS

**** (4 stars) “The Adventurist is a compelling record worthy of real attention.” — Exclaim!

“Man, I love albums that make me wish I had produced them. The Adventurist gives me ample opportunity to rethink what I already know is an amazingly put together album and I have been rethinking it since first listen, each time I listen. Like, would it be better to slide the ending chord of “American Cinematography” beneath the beginning of the next track, “Somebody’s Angel,” like musical tectonic plates? Could “Somebody’s Angel” have used a full choir on the vocal interlude? Should Berryhill have used one producer for a more flowing result?
It is what I do when I listen. Rearrange. Question. Imagine. I mean, I wonder what if musically like a chemist wonders what if chemically. I always have, music being almost as important to me as breathing. I want to pick apart everything and see if I can put it back together better. Sometimes I think I can. Not here, though. The Adventurist is one of those imperfect/perfect albums that if you touch, you destroy. How Berryhill and four completely separate co-producers pieced this together, I will never know, but they did and they did it beautifully.
I was hooked from the Americana-ish intro to “American Cinematography” with the Monkee-ish guitar riff which I heard morph into a cross between chamber music and film background— not just music but elements of ambience. The album, in fact, is peppered with sidesteps, taking a perfectly good song into a parallel universe, be it through a barrage of sounds or inserting what seems like another song altogether, albeit for only short bursts. “Somebody’s Angel,” driven by Beatles-esque strings, follows beautifully and could easily be used on the musical stage. Touches of the fifties and sixties tinge “Contemplating the Infinite (In a Kiss),” the arrangement being the key.
Listening to this album brought back so much of my past. The fifties and sixties qualities are spot on but you have to listen for them. With simple touches like the background vocal/trombone mix on “I Like Cats/You Like Dogs” or the smooth instrumental ride on “Deep Sea Fishing,” Berryhill takes us on a ride into the past. This time, though, it isn’t the same old pop ride we’re used to. This ride dips into territories seldom visited— that inhabited by Sergio Mendes, Nelson Riddle, and others— the arrangers.
In fact, arrangements seem to be what vaults this album into the atmosphere, each song relying on just the right sounds/instruments/chord changes— all in sync and from what I can tell, purely organic (meaning that the music takes itself where it is supposed to go in spite of human interference). I do not mean that Berryhill was handed the songs on a silver platter, rather that she created each from what was within… naturally. Songwriting is a process. And she makes us believe.
I originally had a different header for this review but I had to change it. The more I listened the more I realized that the high points of the album were where unembellished voice meet arrangement. They work both with and against each other at times and I find it not just aurally pleasing but fascinating. I wouldn’t have done it that way, but then again I am neither David Schwartz, Ben Moore, Lee Ray, nor Sheldon Gomberg. I don’t know how they did it (though I suspect that Berryhill’s focus had a bit to do with it), but the four co-producers somehow give the album a cohesiveness hard enough to achieve with just one. As Jimmy Hatlo would say, “Thanks, and a Tip o’ the Hat…”
I also can’t help but think that Paul Williams had something to do with this. Williams was the man behind Crawdaddy Magazine during the golden age of rock magazines— a guy who lived and breathed music and who tried like hell to get us to live and breathe it too. He was also husband to Berryhill. I cannot imagine how Berryhill could have not been affected by him over the years they were together. I firmly believe that this album would not have been the same without him. He taught me a lot and I just read the magazine. I am sure he taught Cindy Lee Berryhill as well, by osmosis if nothing else.
On a personal note, I felt like I knew Berryhill before I ever heard her. My friend Gary Heffern had been singing her praises for years. In fact, he never shut up about her. I should have taken the hint. Gary had never led me astray when it came to music. He still hasn’t. — No Depression/Frank Gutch Jr.

“I have to give full praise to Ms. Berryhill, who I’ve always viewed as a refined writer, but this album is something of an unexpected masterpiece. It’s one of those works that a writer should be proud to have delivered, regardless of the circumstances. It’s certainly an album everyone can simply take to heart, in both good times and bad.” — Popdose

(8/10)”The Adventurist, her first album in ten years, shows that her charm and songwriting skills remain intact. The Adventurist is a compelling record worthy of real attention.” — Exclaim

“Berryhill herself described the songs as “a collection of tone poems about the experiential feeling of enlovement.” Ok, so that’s a mouthful and not something you would hear come out of the mouth of just any old songwriter…..beautiful, moving record” — Daggerzine

“As Robert A Heinlein once said of some Harlan Ellison short stories, “these tales should be served with a small whisk broom, so that the customer can brush off the sawdust, when he gets back up off the barroom floor.” Cindy Lee writes and sings of some of life’s greatest losses and hardest earned gains with terrifying honesty and the courage of an adventurist who survived her adventures. Shared pain is lessened; shared joy is increased. The music of this album does both. The consistently original instrumentation is a bonus.” — Spider Robinson

“..Cindy does not deviate from her musical roots here, and has created a rather bulky, highly complex but also immensely exciting and multi-layered conceptual album , in which she also opens up again to the “Garage Orchestra” – Grandezza and uses a plethora of instruments Including a dish-washing machine.” — Ullrich Maurer, Gaesteliste, Germany

Cindy Lee Berryhill is a performer I met in the ’90s when her husband, the late rock-writer Paul Williams, was on my tv show. Two weeks ago I went to see her perform at McCabe’s in Santa Monica hoping only to wrest my attention away from a personal loss. Within minutes I was agog. The ornate, integrated musicality (there were more than a dozen musicians) and her heartfelt story stunned me like Sgt Pepper’s Lonely Hearts Club Band. Two days later I bought the CD at Amoeba and was relieved to know I hadn’t been just grasping for a better mood at McCabe’s. This album, “The Adventurist,” is the best thing I’ve heard this century. — Art Fein, Little Art’s Poker Party TV Show

“What an impressive, astonishing, honest, complicated, beautiful bunch of songs/performances/words/revelations. Fantastic songs and stunning arrangements. Very timeless Pop in all the good ways.It’s a very inspirational album with musically complicated raw nerve lyrics and the guitar is nice on everything.” — Dave Alvin

“this stands out from the glut as a pop masterpiece.”— Mike Greenblatt, Rant n Roll

“CLB is an unparalleled electric folksinger. She traveled a long distance to write the songs on The Adventurist. You can hear it in the beauty, sadness and unhinged moments that have become signature elements of all of her work.” — John Doe